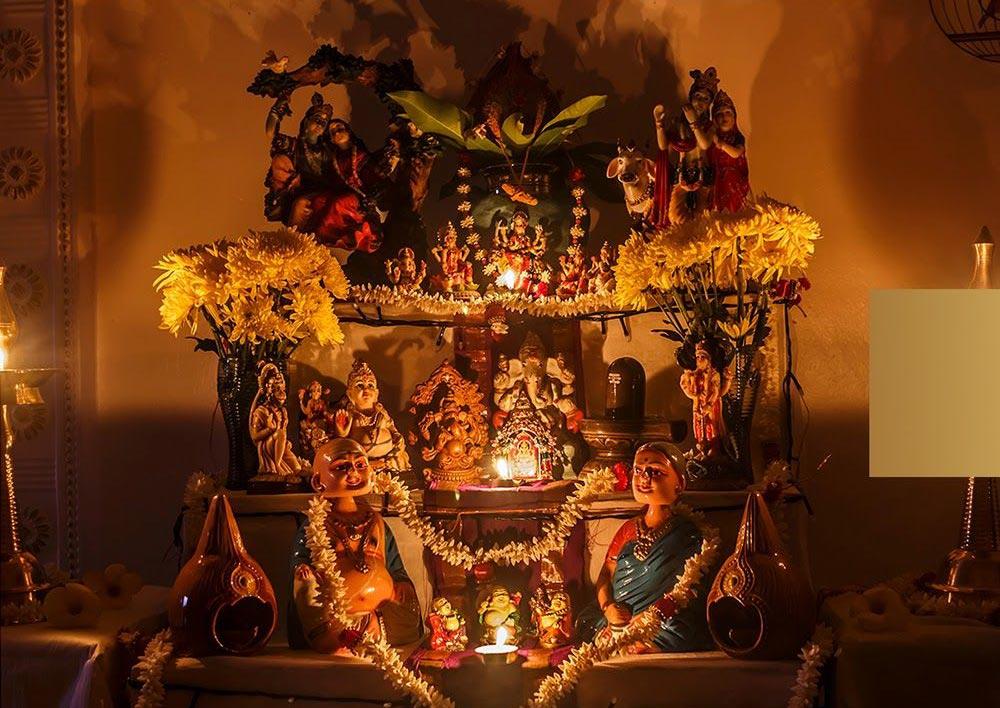 The beauty of a diverse nation like India lies in the unique ways people from different regions celebrate the same festival. The festival of Navaratri is a classic example to showcase this. While in the north it reminds one of Garba and Durga Pujao in the east, each of the southern states has very different rituals to celebrate this festival. But the crux of all these celebrations is the same: the triumph of good over evil.

The city of Mysore in Karnataka is named after Mahishasuramardhini i.e., the killer of the buffalo demon, Mahishasura (Goddess Durga). As evidenced by its name, this city takes a joyous turn for Navaratri. The royal procession of Goddess Chamundishwari on elephants is one of the grandest rituals of the state.

Taking the opportunity to pay thanks to womanhood, the people of Andhra Pradesh and Telangana commemorate the Navaratri festival by making little domes out of flower garlands. Local and seasonal flowers and medicinal herbs are woven to make these vibrant garlands. This ritual is called the Bathukamma.

The 9 nights of Navaratri are divided into 3 sections, each to laud the goddesses Parvati, Lakshmi and Saraswati. In the states of Kerala and Tamilnadu , the last 3 days are used to worship goddess Saraswati to bless us with good education. On the last day named as Vijayadhasami, the books that educate the kids and tools that provide one’s livelihood are arranged in front of a well decorated portrait or idol of Goddess Saraswati. Young boys and girls pray reverently to the Goddess of Knowledge to become successful in life.

In the state of Tamilnadu, a day before the commencement of Navaratri, cartons consisting of stone/mud/wodden idols are cleared out of the attic and each doll is wiped clean off any dust, so that it looks brand new on the Golu. A Golu is a display of several idols on a staircase like structure consisting of 5, 9 or 11 steps. White linen is set on the steps allowing the idols to paint a beautiful picture on the white canvas. In some houses, a Kalash(a copper vessel decorated with a coconut and mango leaves and filled with water, usually representing the presence of God) built on the first day of Navaratri is placed in the middle of the top most step along with idols of Gods and Goddesses. Several stories about various Gods (Leelas) and avatars of several Gods are represented using dolls in the steps below. After Gods and God men, idols of humans are arranged. One common setup is of Chettiyar ayya and amma with small cups filled with grains and pulses lined up around them. This is to bring wealth and prosperity to the homes. The steps below contain animals, birds and insects. This entire structure defines the order to reach Godliness according to Hindu mythology.

As any Indian festival, the Navaratri is also famous for certain special mouth-watering delicacies made to honour the festival. The houses are cleaned; decorated and colourful Rangolis are drawn for the occasion. The type of celebration in each region may be different, but the spirit of the festival always stays strong owing to the tradition behind it.