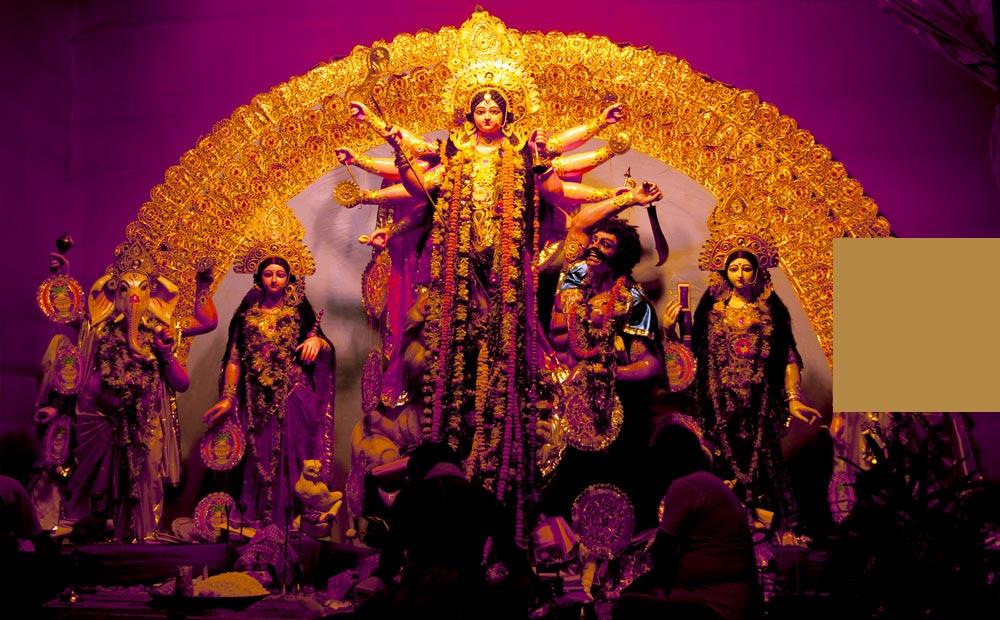 Durga Puja (Durga Pujao) is a Hindu festival celebrated predominantly in north-eastern India. The Navaratri fever is prevalent in the regions of Bengal , Assam and other north eastern states of India as the Durga Pujao. This festival is celebrated to rejoice the victory of Goddess Durga over the buffalo demon Mahishasura. The crux of this festival, like any other Hindu festival, is to honour the triumph of good over evil.

The earnestness of the Durga Pujao can be felt in these regions several days before the commencement of the festival. Extravagant “Pandals” (Idols made of bamboo, straws and moulds made of clay depicting stories of Goddess Durga) are constructed around the city. From enormous life-like spectacles to small shrines, the Pandals can be found in all ranges. Not just the idols, but the entire gallery is decorated with colourful ornaments or millions of vibrant bangles or replicating famous Hindu temples. These flamboyant displays can captivate the senses of any onlooker in a flash. “Pandal hopping” is one of the famous activities done during Durga Pujao i.e., the people visit as many Pandals as they can. Right outside said Pandals, hundreds of small snack shops selling mouth-watering chaats can be found, enabling people to indulge in a plethora of street food that can befuddle one’s senses and stomach.

Durga Pujao is celebrated for 10 days during the months of September and October. The main days of celebration are as follows,

The first day is called Mahalaya , when the celebration is initiated. On this day, Goddess Durga is believed to have come down to earth and to denote the same, many Puja are done. On this day, a banana tree is decorated to look like a bride and the goddess’ blessings are invoked. The eyes form the crucial part in any art. In order to solicit blessings from the Goddess, the eyes of goddess Durga in the Pandals are drawn on this day. A lot of people go on a fast during this festival, starting from this day.

Not only Goddess Durga but also other forms of Goddesses like Lakshmi and Saraswati are worshipped during this time. On the 7th day, Mahasaptami, the soul of the goddess is believed to be invoked in the bridal banana plant. This procedure is called Pran Prathishta.

The 8th day is known as Maha Ashtami . This day is marked to pay respects to little girls by doing the Kumari Puja . This ritual was started by Swami Vivekananda in 1901. On this day, the Dhunuchi Naach is also done. Dhunuchi is a clay pot consisting of burning coconut husk with fragrant items like camphor and resin of Sal tree. Men and women hold this in their hands and dance to rhythmic beats. The smoke from the Dhunuchi is supposed to be good for health.

On the 9th day (Mahanavami) the Maha Aarti is done. The fire in the goddess is believed to burn higher and brighter to a point that it eradicates the evil around Her. The fast is also broken on this day.

On the last day, Vijayadhasami , Goddess Durga is said to be on her way back to her husband, Lord Shiva. To denote this, the idols of Goddess Durga are taken in a procession all around the city and finally immersed at sea. Married women throw Kumkum in the air to denote the Goddess reaching Lord Shiva, and smear kumkum on their faces as well as on other married women’s faces. This process is called Sindoor Khela .

Now-a-days Durga Pujao has breached boundaries and become more of a social gathering where people partake in Puja, dance the Dhunuchi Naach, visit the Pandals and enjoy the street food.